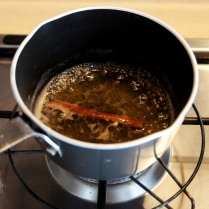 Bring to boil, simmer for 6mins

Place water, honey and cinnamon stick in a small saucepan. Bring to the boil, then reduce the heat
and simmer gently for about 6mins, or until thickened and reduced by half. Discard the cinnamon
stick.

Add the flaked almonds into the honey syrup and stir in well. Grate the zest of the orange, you’ll
need ½tsp of zest for this recipe.

Place onto the tray

Preheat the oven/grill to 180-200C. Grease a shallow baking dish. Slice the figs into quarters from
the top to within 1cm of the bottom, keeping them attached at the base. Arrange in the prepared
dish. 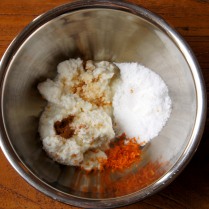 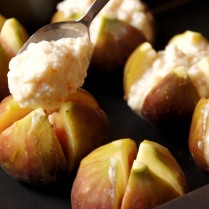 Combine the ricotta, vanilla, icing sugar, ground cinnamon and orange zest in a small bowl. Mix well.
Divide the filling among the figs, spooning it into the cavities.

Top with almonds in syrup 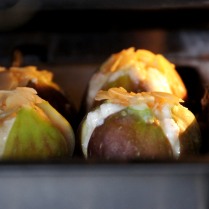 Place under grill for 10mins

Top each fig with almonds in syrup. Place under grill and cook for about 10-15min or until the juices
start to come out from the figs and the almonds are lightly toasted. Cool for 2-3mins. Spoon the
juices and any fallen almonds from the bottom of the dish over the figs and serve.