Preheat oven to 170C. Lightly grease a 20x30cm baking in and line with backing paper, leaving the
paper hanging over the two long sides. 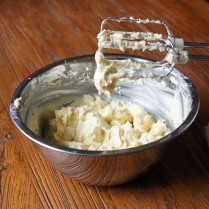 Beat until light and fluffy

Beat well after each egg added

Fold ½ of cream and ½ ginger
Beat the mixture well after each egg is added. Beat the cream until soft peaks are formed. Fold in
½ of cream and ½ of ginger (finely chopped) into the cheesecake mixture. 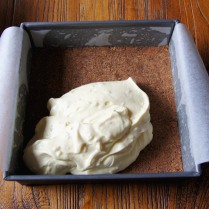 Place the mix over the base 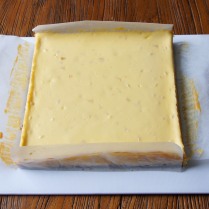 Spread the cream over the cake

Cut into slices
Beat the extra sugar into the remaining ½ cream. Spread over the cheesecake. Decorate with
remaining ½ ginger, sliced. Using a hot dry knife, cut into three strips lengthways and then cut each
strip into eight pieces.